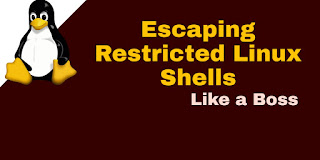 Good day to all, In this blog post we will discuss some/all methods of Bypassing/Escaping a Restricted Linux shell (rbash) but before that here comes the basics.

What is a Restricted Shell?

It is just a shell which imposes some restrictions on a users ability to run commands and only allows them to run some specific commands.

A Restricted shell may include these restrictions as follows

Enumeration is the key
Our first step while dealing with Restricted shells is to enumerate the environment. This will be the key step since this is going to help us in bypassing it. Here are the steps you should follow while enumerating

Here is a practical demonstration of the steps involved in enumeration and since it is a CTF challenge and the user is probhited from posting solutions online so I will hide the necessary details.

In the above screenshot you can see that I tried for the commands like ls, echo and cd out of which echo was found to be working. For those who don't know - echo can be used as an alternate to ls by using it like - echo *  , so I found that it has three directories ( hidden by blue line ) so I started looking for the directory contents and found that I can only see the content of one directory only. Luckily we found vim here.

Basic Exploitation
In half way of our enumeration we found echo to be working and a directory containing VIM. However in your case it might get different. Here are the basic techniques that you should try right after enumerating based on what you enumerated.

Let's get back to our target, since we got a shell using vim, we can now check for sudo -l for further enumeration.

Here's what our target yield when I run the command /usr/bin/sudo -l on the target.

With this we can conclude that sudo allows you to run python. Here's how you can use python to escape -  /use/bin/sudo -u user /usr/bin/python

And you'll get in interpreter, type these two commands there

And it'll get you a bash shell. You can also directly run this

Here's how you can escape with other programming languages as well :

So this is where we call it a day folks, make sure to share this post if you learnt something from it.  I'll meet you guys in the next post, until then have a safe hack.