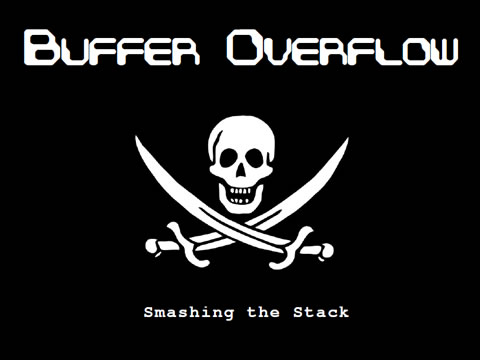 First we need to
know what is a Buffer Overflow -

A Buffer Overflow is where you input too much data into something that cannot hold it. Simple right....

Why to Buffer Overflow anyway ?

A Buffer Overflow’s main objective is to overwrite the memory address within the EIP (Extended Instruction Pointer) register to control the flow of the program.

The EIP register is an Address Register. Means it stores memory addresses within it. The EIP register is used to point to the next instruction that is going to be executed. During calling functions, the value of EIP is stored in the stack and is later collected and put back into the register so that it can return to it’s previous location just after the function call. If you can alter EIP’s value, you can change what’s executed. That’s one of the main reasons Buffer Overflows are so widely used, especially if the program is running as root. That could allow you to make the program execute something under root privileges.

How do we do this?

This program simply outputs the user’s favorite colour as entered via a command-line argument.

For ex- “./colour blue” would output “Your favorite colour is: blue”.

Let’s compile that with gcc and get exploiting. (We’ll be using the command “gcc -mpreferred-stack-boundary=2 -o colour -ggdb colour.c” run as the root user).

It’s very likely that you’ll encounter warnings during compilation but what do you expect when you’re attempting to design vulnerable code?

Remember that our aim is to overwrite the EIP register. We’ll be using gdb (The GNU Project Debugger) to see what’s going on and whether it’s worked.

Below is a diagram of how the program variables and registers appear within the stack at this moment.

The reason this didn’t work is because there are several nested functions (Including the call for the printf function, which is where our error “0x4002269f in strlen () from /lib/libc.so.6″ is coming from. Printf in actual fact calls vfprintf() and then that calls strlen, creating a lot of jmps in the code)in the program which means that there are multiple stack frames. The perl print has most likely overwritten past EIP and then overwritten some important function arguments stored in those stack frames. We can use the list command in gdb to view our C source and decide the best place to add a breakpoint.

Now we can see we have made arr become equal to our memory address 0×41414141 however we need to remove the NULL that is also there, so for good practice, we’ll use less A’s until we get to the perfect number. So let’s delete our last breakpoint and do that.

So now we have our perfect number. Next we’re going to need some shellcode and the value of ESP. What’s the ESP register? It’s the register that points to where the top of the stack is. We go about getting it from our own little C program as shown below. (The ASM in our code below is written in AT&T Syntax and not Intel Syntax so don’t get confused because we’re moving the value of ESP into EAX)

root@Root:~/Desktop#./espval
Value of ESP: 0xbffffef1
You’re probably wondering why we actually need this. It’s needed because we want to create a NOP sled. A NOP sled is a collection of NOP instructions that do nothing (NOP = No Operation). The hex code 0×90 is usually representative of NOP.
For the purpose of this tutorial, we’re going to be using Aleph1′s Shellcode and save us the time of writing our own.

It is as follows below:

Now let’s put that into a perl variable called shelly.

Our attack buffer is, in this case, 158 bytes. We need all the parts of our exploit to add up to 158 bytes. It’s generally good practice to have about half of that for the NOP sled. So we’ll use about 75 bytes. Next comes the difficult bit. We need to guess our return address so that it ends up in the NOP sled. I’ll estimate 0×80. I subtract this fro the ESP value as shown below to get my Return Address.

0xbffffef1 – 0×80 = 0xBFFFFE71
Now we need to convert this address into Little-Endian format because that’s the architecture we are working with (This just involved flipping the bytes of the memory address around in Shellcode (remember, 2 hex characters per byte)). This gives us:
x71xfexffxbf

Now to find out how many times we need this, we need to do a simple calculation; (Attack Buffer Size – Number of NOP bytes – Number of Bytes of Shellcode) / 4 bytes that make up our return address.

You may want to read my other tutorials -

Hack anything with hardware keyloggers